Science integrity and the path of abstraction

The best science communicators spend their days sweating, straining, and trying to keep their balance as they climb up and down a wobbly ladder.

They engage audiences by relating scientific concepts to concrete, visceral experience along what Canadian-born linguist Sam Hayakawa termed "the ladder of abstraction." Sometimes the task lies in communicating an intellectual concept through a down-to-earth illustration at the foot of the ladder. Other times, a personal experience demands linkage to a higher calling and mounting the upper rungs. 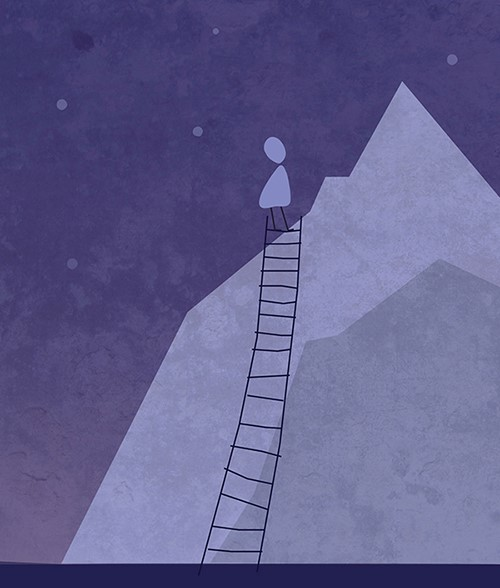 Writing teachers warn students against resting at the middle where the worst of techno-speak bureaucracy resides. You have to keep moving up and down to both hold your audience’s interest and keep your eye on the big picture. I’m trying to do it here by tying linguistic theory to images of writers sweating and straining.

For many communicators, teachers, and writers, the model works fairly well.

But I never really liked the metaphor of the up-and-down ladder because it suggests a futile process with no purpose and no end. Maybe, some science communicators in government can relate to that, but I longed for something more inspiring.

If you google "ladder of abstraction" or just the word "abstract," chances are you will find the notion of "integrity" cited as an abstruse idea begging lower-rung, concrete illustration. I learned this about a decade ago when my organization introduced a new research integrity policy, and we turned our heads to developing outreach and education tools to share its provisions.

Only when we turned our conversations to public controversies and testy sub-issues around authorship, the treatment of human beings in research, and the care of animals did we make an impression and find a way to keep our integrity audiences from falling asleep.

This experience and Sam Hayakawa’s wobbly ladder came back to my mind this month in Cobourg, Germany when I took part in the Kick-off for the European Union’s Path2Integrity Project: a three-year, multi-nation effort to teach science integrity concepts to high school and undergraduate students across the continent. Most of the people involved in Path2Integrity are professional educators and education scholars.

My presentation was the only one to cite "the ladder of abstraction," but all at the Kick-off were seized by the challenge of reaching young students, many who would not see themselves in research careers.

The approved plan assumes that this can only be done through some form of participatory, rotational role playing around interesting, real-world, lower ladder issues.

People who craft research integrity policies and fund initiatives like Path2Intergity are often prompted to do so by those public controversies and scandals, and they do not want to hear any more bad news. But controversy and public issues – things found on the lower rung of the abstraction ladder - seem to be the essential raw material for engaging people in the science integrity issues, the policies, and their importance.

An enterprise I like in this realm is the Canadian High School Ethics Bowl, an initiative supported by the Canadian Commission for UNESCO and planned for Winnipeg’s Canadian Museum for Human Rights in April 2019.

The Ethics Bowl is a competition. But unlike a debate in which participants assert a specific position to overpower that of their opponents, the Ethics Bowl asks competitors to work collaboratively to identify the best response to a given challenge. The students are judged on how well they do this.

They discuss ethical dilemmas and compare strategies, adjusting their positions when faced with convincing arguments or new facts. The young competitors not only learn, but also teach one another as they take part in tough conversations about real-world issues such as: freedom of speech versus protection against hate speech; the global refugee crisis; mandatory voting; a ban on junk food; police participation in Pride parades; and the use of drones in war. In a world aching for collaboration, truth, and shared understandings, the Ethics Bowls demand celebration and, I think, imitation.

I am pretty sure we can find similar topics from the world of science integrity, and I thus shared the Ethics Bowl model with my new friends in Cobourg.

As we talked about this, I realized that the Path2Integrity project could foster a new, more inspiring abstraction metaphor.

Instead of climbing up and down a ladder, we might envision walking along a path: one that dips into hollows, goes up hills, passes through open fields, and takes you to breathtaking views. But all the time, you are heading somewhere specific, you are progressing, and you are coming closer to a satisfying goal.

So, over the next few years in pursuit of abstract ambitions on the Path2Integrity, I am going to imagine a hike over the rolling hillsides of Bavaria, and maybe, I will finally get off that wobbly ladder.